An architect was needed to design this monumental work that will cover the facades of the Mâconnais towers in Chambéry-le-Haut. The Belgian Luc Schuiten was chosen by CitéCréation to design two frescoes on the 1970s buildings, emblematic of the district, managed by the landlord Cristal Habitat. “To date, they are the highest frescoes in Europe, at 49 metres high,” says Thierry Repentin, the mayor of Chambéry and president of Cristal Habitat.

Here we find the “touch” of the architect and theorist of the plant city: the fresco represents trees inhabited by fauna and luxuriant vegetation, which are integrated into the windows of the eighteen floors.

Present for an inspection tour today in Chambéry, Luc Schuiten details his intentions: “This project is deliberately geometrical. The view is from the bottom to the top, which gives the impression of an inhabited tree. The link is made between nature and the very geometric building block. It is also a metaphor for the people who live there. We hope to create a deep attachment and connection through the graphics. “The founder and manager of CitéCréation, Halim Bensaïd, hopes to “bring people who don’t usually come to Chambéry-le-Haut to see this unique monumental work, which is perfectly integrated into its environment, and to change their view of the district”.

The murals will be created by five muralists, including a Savoyard, Juliette Rat-Patron, specially trained by CitéCréation, which has no less than 850 murals to its credit worldwide. 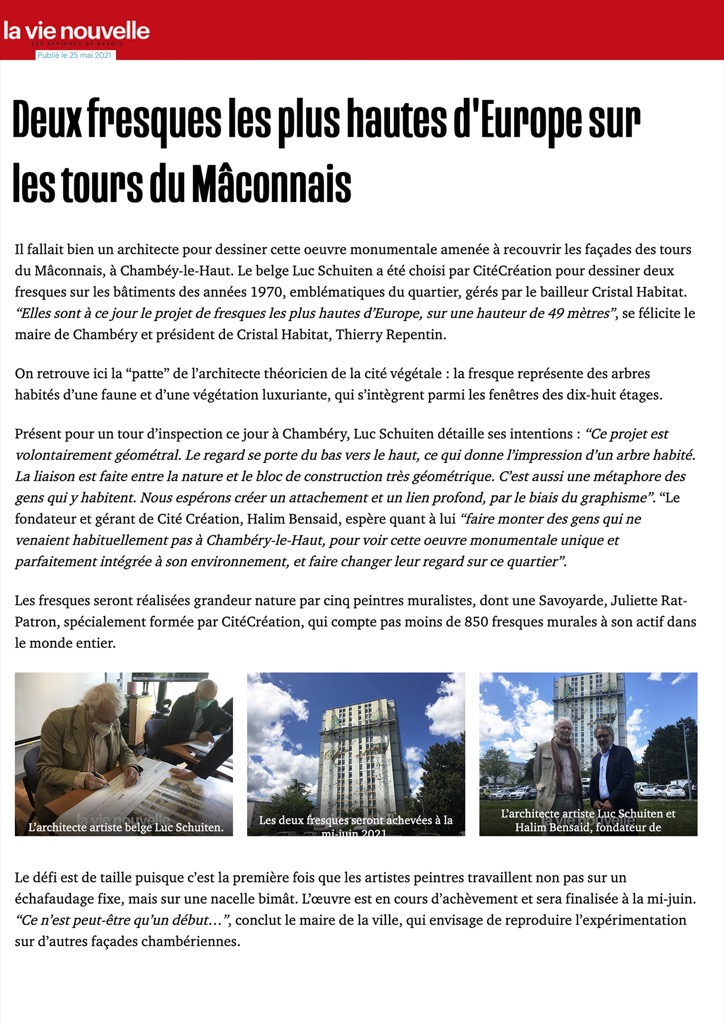