Journal de la Haute-Marne : A wall as a reflection of the soul of the inhabitants

Chaumont Habitat is undertaking an operation to renovate its residences, both in terms of energy and aesthetics, with the creation of monumental frescoes on the facades of certain buildings, in partnership with CitéCréation, and in consultation with the residents. It all starts with Rue Ribot.

“It’s daring. But we have to be bold if we want to change the image of the neighbourhood.” Halim Bensaïd, project manager and co-manager of the CitéCréation cooperative, presented the sketches for the future murals that will be created next spring in Rue Ribot.
The project is led by Chaumont Habitat. The Office is undertaking a large-scale thermal rehabilitation operation on several of its buildings with the aim of offering a more pleasant living environment from an ecological and economic point of view, but also with the desire to restore colour and attractiveness to the district.
Initially, it is the 18/l0 and 47/49 residences in Rue Ribot, located in the Val Barizien district, that will be concerned by the creation of two gigantic mural frescoes.
On 15 September, a first consultation meeting with the residents took place. From this meeting were defined the directions that the team of painters and muralist designers put down on paper.

“We are not here to simply embellish the city, but to make it better and bring a little emotion.”
Halim Bensaïd, CitéCréation project manager.

On Tuesday evening, for the second participative meeting, Halim Bensaïd reminded the 800 projects in France and abroad of his company’s commitment and values.

Our job is to retrace the history and the memory of the inhabitants We are not there to simply embellish the city, but to make it better and to bring a little emotion”, he said in the preamble. The collaborative work has given rise to a certain number of aspirations and ideas that have been retained for this new cultural element, which is free and accessible to all.

“The colourful neck theme was inevitable. It was necessary to highlight a kind of popular cheerfulness. We understood it well. »

sport, as an element that brings people together and “where youth has its place”, popular graphics that speaks to everyone”, remarkable architecture” that at first glance makes us say that we are in Chaumont. “(Viaduct, Halles, turrets…), nature, flowers, the forest, pastries, gloves, cutlery… So many ideas brought to the team on a plate by the inhabitants. “Chaumont, dynamism, cheerfulness and popularity will serve as a common thread for all the murals. »
Indeed, this project goes further. It is part of a series of frescoes throughout the town of Chaumont.
“We are only at the beginning,” says the project manager. All the themes that emerged during the consultation will be used for other murals.
“We were surprised to see that the inhabitants went towards very human themes. Before, we were asked for futuristic visions of the world. We’re going back to the basics. »

The history of Chaumont and its inhabitants will be told along a route, in a contemporary way. with colours determined by a graphic writing. still unpublished for the muralist painters of CitéCréation.

Result on November 24th with the presentation of the model and, on sunny days, the first brushstrokes. In the meantime, Halim Bensaïd is counting on the local residents present to take on the role of ambassador and thus help to understand the work to enable everyone to make it their own. “What is important is the progress we have made together,” insists the project manager.

“The interest of these frescoes is not only for the people of Chaumontais. They also invite people from different backgrounds to come and discover. They project things which exist but which can also be dreamt of and desired. They will lead to other reflections. »
With 42 years of experience, Halim Bensaïd ensures that their works “have a real social impact. And that’s quantifiable! Creation of new businesses, reduction of vandalism, etc. Doing paint for the sake of doing paint, that’s a no. It’s not us! “We bring a change of image. An extra soul and symbolic force that really exists. »

The Ribot-Loucheur district has a population of 4,000 inhabitants, i.e. 1/4 of the population of Chaumont. Yet, as Chaumont Habitat points out, it has escaped the various urban renovations such as ANRU I and Il and other aid. This concerns 600 to 700 social housing units and other dwellings with very different constructions from the 50/60s to 2003. A wide range of products, flats and houses. with different rents.
For a long time now, this district has been suffering from its bad reputation but, Chaumont Habitat can no longer lose tenants and let the population fall. A change of image is necessary. However, improving the quality of the buildings with savings in terms of charges cannot solve everything. “We wanted to offer a little more to the inhabitants, make it more pleasant to walk around and make the area more attractive. Eventually, the idea would be, why not, to bring back small shops. In other sectors, the rehabilitation will involve other aspects, in particular work on plants and light, as well as collaboration with young secondary school students.

On Sunday, the themes chosen for the first two murals on the route and the sketch of the works that will be created by CitéCréation on the buildings on rue Ribot will be presented. 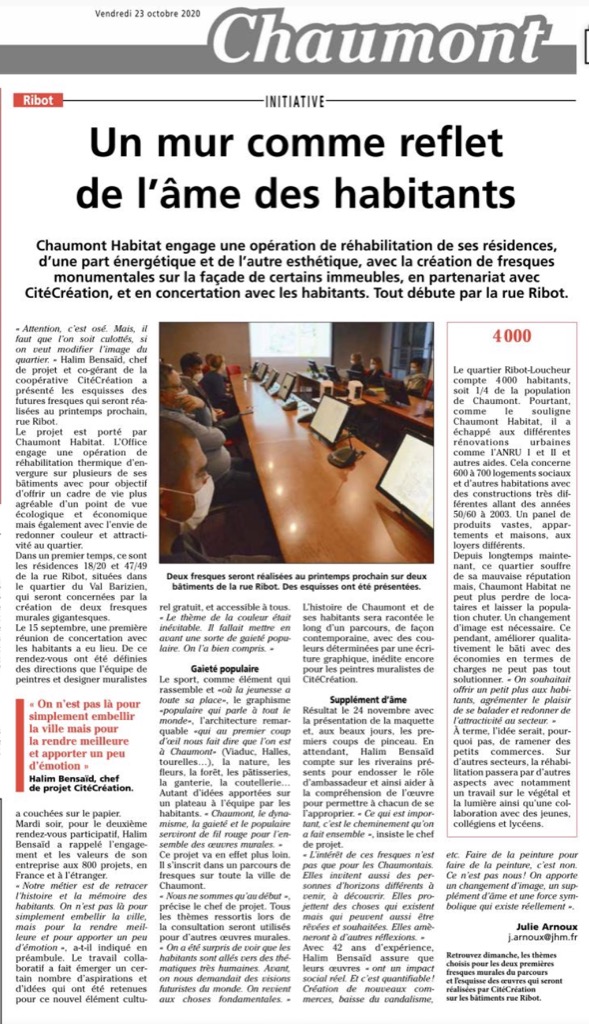