It is wall-walled in Beauregard… Le Pays

He murmurs himself in Beauregard…

The artists of CitéCréation will create two large frescos in Beauregard on buildings belonging to Loire Habitat. In this way, the illustrated account of the sub-prefecture is given.

Beauregard, “sensitive district”… to pictorial art. We remember the masterstroke carried out in 2018 by Forez Colors on the floors of Tower 19 (the ephemeral Beaureg’art exhibition attracted 8,000 visitors). The immense work of Ella and Pitr still lives on the facade. But the eyes of passers-by will soon be looking through new walls, as Loire Habitat has entrusted CitéCréation with two gables from its group of buildings.

A graphic style inspired by the children’s book

The company, it should be recalled, is known here for having painted the wall of Allard’s garden. It will take place this Thursday and for one month, at 5 rue Auguste Renoir and 3 avenue Paul Cézanne. The theme of these two gigantic works to be born? Open books on youth”. Echoing, explains Loire Habitat, the celebration that Montbrison devotes to them every year. “The graphic style will therefore be inspired by children’s albums. “Colourful, lively, dynamic. Without perspective but with “silhouettes that can be identified at first sight. »
Consulted through workshops between June and September, residents, associations and local residents guided the artistic choices. Until two models are validated. The murals of CitéCréation will represent the city, its heritage and culture.

One being dedicated to the heart of the city, we will be deliciously lost in the contemplation of local symbols and attributes: the music school, the medieval heritage, especially the cathedral, the small bridges, the castle ruins, but also the market, the fourme, the Gégé dolls, the women’s basketball.

The market, the Gégé dolls, Henry’s…

The second, more intimate, will bring the neighbourhood to life in 2D. We will find the shopping centre and its square but also a tightrope walker in memory of a Henry’s performance.

The partners will push the attention to detail to the point of integrating the condemned tower n°19 (Epora announces its deconstruction, which has been postponed several times, for the first half of 2020). “We drew it with pages,” explains CitéCréation. Like an open book… Like a page that turns! »
Note that two Forez Colors animators will be involved in the production. A nice return of the elevator after their investment in the neighborhood. A great opportunity, above all,” says Jordan Gerphagnon. “We are trying to get out of our comfort line of graffiti. It’s a different approach. This work is destined to last.”

CitéCréation: World leader in monumental wall design, CitéCréation has created more than 750 frescoes in France and around the world (including the “Nice looking” paintings of the Total refinery in Feyzin, the comic strip route of the city of Angoulême and the mural of the Lyonnais). The company, headquartered in Oullins, was founded in 1978. It relies on a network of 80 muralist painters. 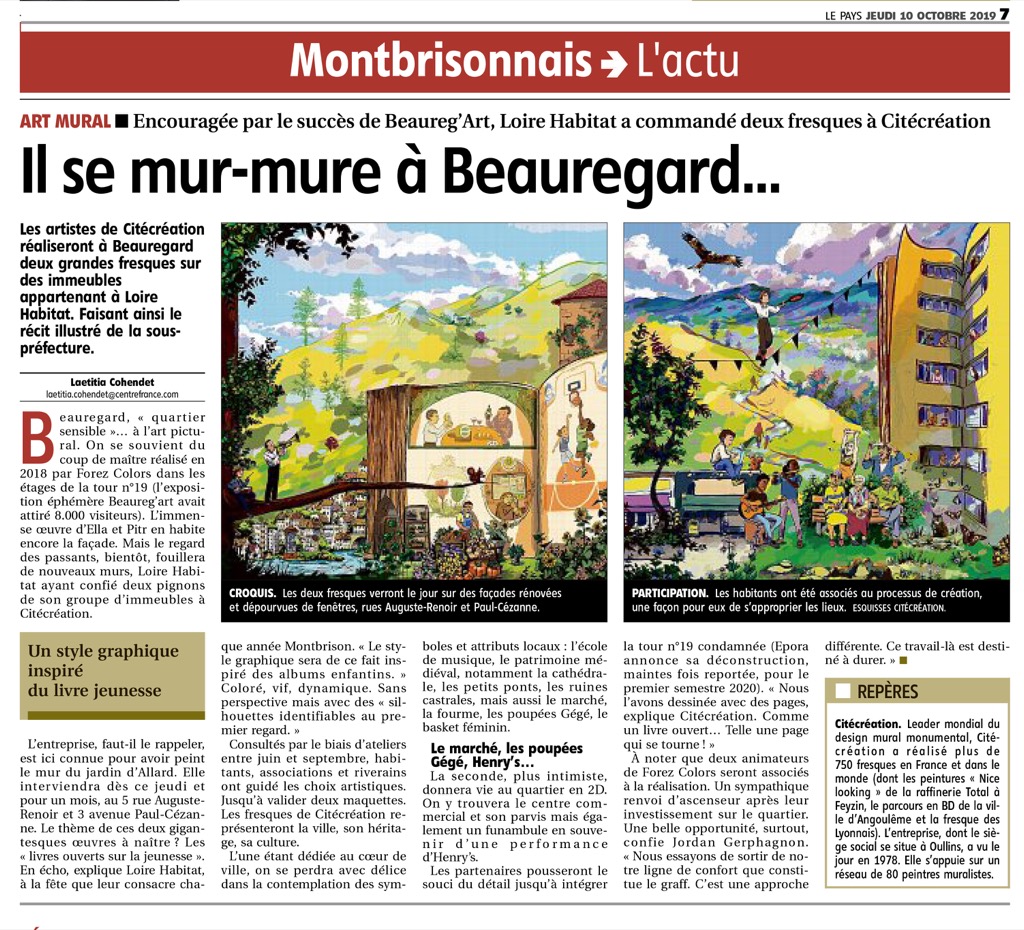 It is wall-walled in Beauregard... Le Pays