The highest murals in Europe are in Chambéry-le-Haut

The rehabilitation of Chambéry-le-Haut is taking on a spectacular side. For a month and a half, a giant fresco will be drawn, little by little, on the façade of the Dent de l’ours tower. A monumental project.

The two towers of the Mâconnais are breathtaking: 18 floors, 50 metres high. A symbol of the district, they dominate the Chambéry cluse. A symbol that is not always appreciated, but which is currently being rehabilitated. Cristal Habitat has invested 13 million euros in their thermal and aesthetic renovation. The final touch: two monumental frescoes that will cover their façade.

“Fifty metres high, like a major tree,” says Luc Schuiten, Belgian architect and designer of the urban work. It took him a month and a half to create “this special tree because it is inhabited. There is a very varied fauna that comes to build nests and homes in this tree. It makes the link between the green space at its base and the very geometric building blocks of the tower. My work is to erase as much as possible the difference between the built and the natural, as a kind of reconciliation between man and nature. To create an emotion to love the place in which we live much more. To turn a relatively anonymous building into something more personal, a unique place.

The project was initiated by CitéCréation, the world leader in monumental wall design (see below). The Lyon-based company has produced 850 works in 40 years. Although the one in Chambéry-le-Haut is not the largest (22,000 m2 covered in Berlin for “only” 1,000 m2 in Chambéry), it is the highest in Europe. “When the work is finished, you will see how it will turn around the city,” predicts Halim Bensaïd, the founder. “From one day to the next, people will come up to the area who would never have come up, they will come to visit because it is spectacular, you don’t see it on every street corner.

And all of a sudden, they will say to themselves: “This is a good place”. It will change their view. ” The tenants were involved in the project from the start, citing the green setting as an essential element of their neighbourhood. The result is a watercolour, with a slightly cartoonish design, representing two imaginary trees. Work began a week ago on the Dent de l’ours tower.

Five muralists, one of whom is from Chambéry, are busy on a gondola, each responsible for creating a piece of the drawing. Thus, each day, the motif appears, line after line, like an illustration coming out of a printer. The final result will be visible in mid-June. We will have to wait until the beginning of 2022 to see the Crêt de l’aigle, in turn embellished with a giant tree.

Thierry Repentin, mayor of Chambéry and president of Cristal Habitat – “delighted that one of his favourite comic book authors, when he was young, was chosen” – hopes to reproduce the operation on other towers. This is the cost, in euros, of the monumental mural in the La Dent de l’ours tower.

“We saved on the cladding,” says Thierry Repentin, mayor of Chambéry and chairman of Cristal Habitat. “Instead, we chose an insulation system, which accepts paint. ” Founded in 1978, CitéCréation, the world’s leading company in monumental mural design, has over 42 years of experience and more than 850 murals in France and around the world. It studies, designs and carries out monumental mural design projects ranging from monumental narrative murals to the overall ornamental embellishment of buildings and districts under construction or rehabilitation.

The works created by CitéCréation are carried out according to the highest aesthetic and technical standards. CitéCréation has also been approved as a social utility company (Esus) by the Ministry of the Economy. In 2019, the Banque des territoires, a subsidiary of the Caisse des dépôts, will acquire a stake in CitéCréation to accelerate its development. 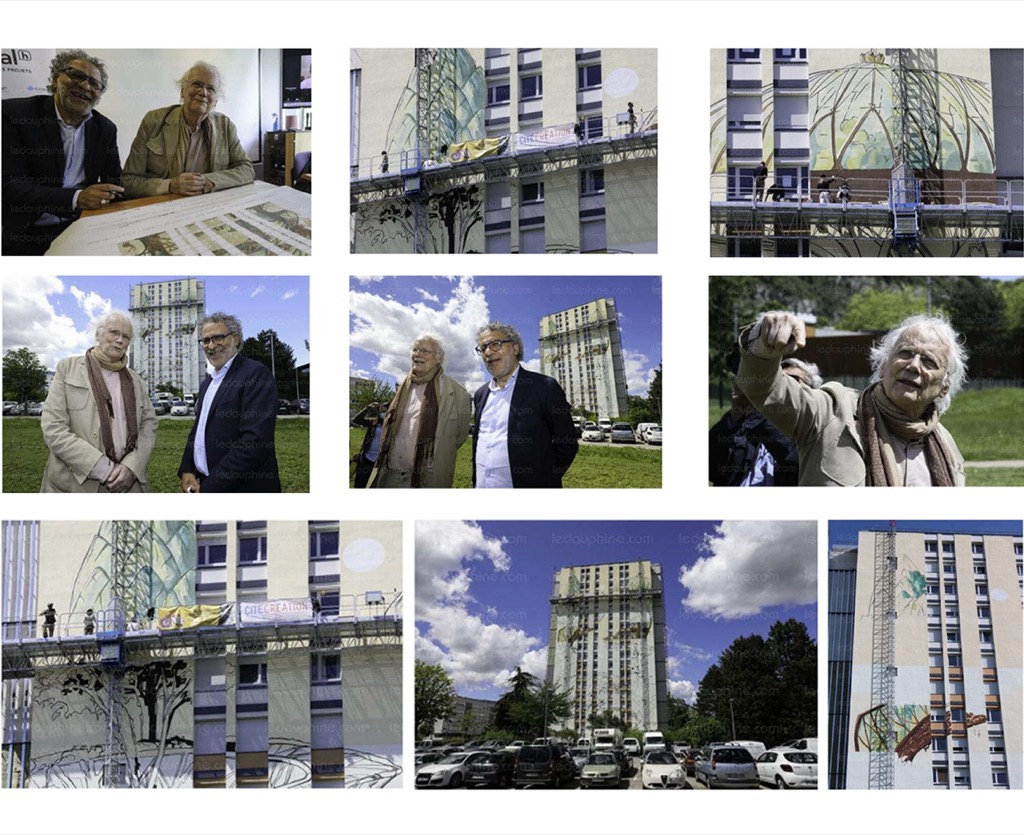