The city of Plaisir and the company CitéCréation unveil a new project of several murals.

Three new works will be added to the four others built in 2017 and 2018, as CitéCréation indicates in a press release. The objective of these murals is to enhance and improve the living environment of the inhabitants of the district.

In line with the approach to enhance and improve the living environment of the Valibout district begun in 2010, the city of Plaisir and The Yvelines Essonne residences have entrusted the CitéCréation company with the programme to beautify the façades of the residences with the creation of monumental, permanent and high-end murals.

“CitéCréation offers much more than wall paintings, it carries out a real work of exchange and listening to the inhabitants” explains Cyrille Savina, in charge of the mediation and prevention department of the city of Plaisir. “That’s why we called on them. We know that it is a sustainable project that will stand the test of time and make the inhabitants of the district and the city as a whole proud. This is the case for murals already made.”

The themes of these murals were chosen by students from the Blaise Pascal high school in Plaisir, in order to involve local residents in the project.

Faithful to its values of proximity and in order to offer works that are perfectly rooted in the territory and among the inhabitants, CitéCréation has naturally included the Blaise Pascal middle school students’ council in the working group.

“It made sense to involve high school students in this project. Nearly 50% of the students live in the Valibout district! They are the ones who will live with the murals on a daily basis…” explains Lionel Toutain Rosec, associate co-director of CitéCréation. Through co-creation workshops, the school board was able to freely choose the themes that were close to its heart. 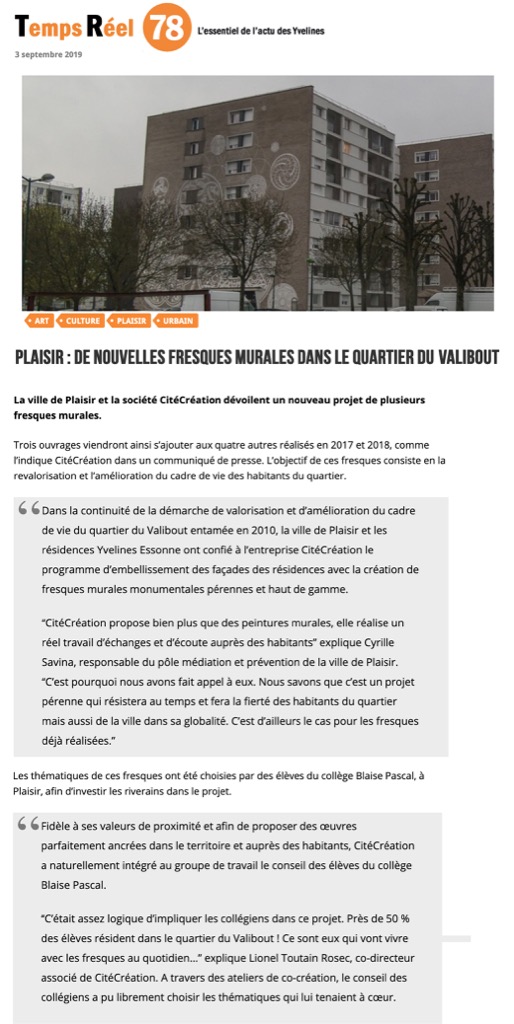