Designed by Luc Shuiten and painted by CitéCréation, two monumental murals have been commissioned by Cristal Habitat to upgrade the Mâconnais towers in Chambéry-le-haut.

Work on the first fresco, on the “dent de l’ours” tower, began on 17 May and should be completed by the end of the month. A second fresco, on the Crêt de l’aigle tower, will be painted later in the year. At 54 metres high, these murals will be the highest in Europe.

CitéCréation takes up the challenge! The cooperative and participative company, based in Lyon, has completed more than 850 murals worldwide. To be so mobile, the company has a small permanent team of 7 people and works with freelance painters on the sites. Normally, CitéCréation installs scaffolding to create its murals. But the size of the towers required the use of another method: the gondola.

“This is a first. There is a big difference because everyone is painting on the same floor. It’s a different approach to production,” says Gaspard Mariotte, the project’s artistic director. A team of six painters works all week. They start from the top of the tower and gradually paint the fresco, like a printer. Once at the bottom, they start again for a “second scan”, more detailed. The work is very dependent on the weather, as the artists cannot paint on a wet wall.

The company chose the famous architect-draftsman Luc Shuiten to design the murals. “We felt that his world matched the theme of the place,” explains Gaspard Mariotte. He does a lot of plant cities, he is the junction between architecture and arborescence,” adds Juliette Rat-patron, independent muralist. These two trees, which stand out from the crowd, fit in well with the vegetation of the neighbourhood. The inauguration, which marks the end of the rehabilitation work on the first tower, will take place on 1 July. 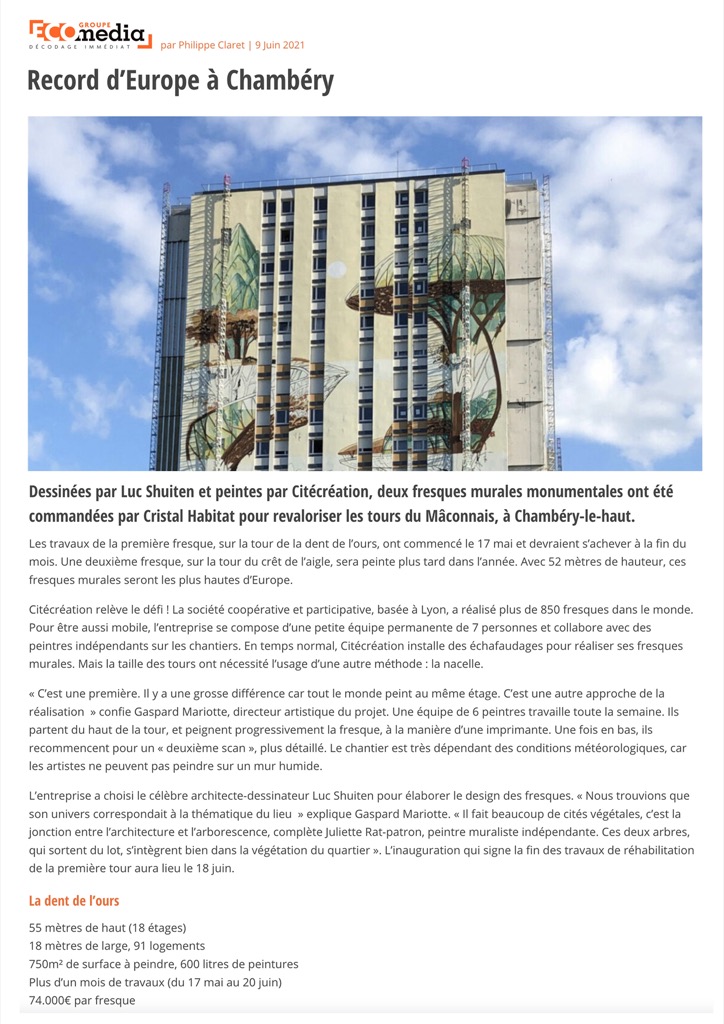