Press release: Monumental wall design according to CitéCréation: an effective lever to revitalize territories and their built heritag

Monumental wall design according to CitéCréation: an effective lever to revitalize territories and their built heritage

Following the finalization of the seventh heritage mural in Plaisir, CitéCréation, a leading cooperative company in monumental wall design, is establishing itself as a partner for communities, developers, landlords and businesses. Their achievements make it possible both to enhance the built and human heritage and to accelerate the tourist and commercial attractiveness of a territory.

“Each project is unique. We involve elected officials, builders, architects and residents from the design stage. These murals will be living for decades in the heart of the territories since we integrate the ten-year guarantee into all our projects,” explains Lionel Toutain Rosec, co-director of CitéCréation.

The proven effects of such installations
Demographic, economic and tourist attractiveness, monumental mural design has shown its interest for cities, developers, landlords and companies. In Angoulême, some thirty murals created in co-creation with the International Comic Strip Festival are now an integral part of the tourist circuit, attracting several tens of thousands of tourists each year. Thanks to a global policy developed over the long term between the city and CitéCréation, the 9th art shines beyond the Festival.

Monumental murals also act at the heart of companies by transforming buildings to make them more aesthetic. For example, the TOTAL refinery in Feyzin (69), in the Rhône Valley, whose facilities were difficult to integrate into the landscape, has seen its presence better accepted by the inhabitants following the beautification of its tanks.

These economic and tourism impacts are accompanied by a local dynamic by developing “living together” and the social cohesion of cities. In Tonnerre, Yonne, the tenants of the Lices residence were successfully involved in the entire project.

“We also work alongside social housing actors. Thanks to the strong participation of all stakeholders and residents in the design of the projects, our interventions contribute to significantly reducing deterioration in the collective space (20% improvement), but also acts of incivility” adds Lionel Toutain Rosec.

CitéCréation: more than 750 projects carried out worldwide
Created in 1978, CitéCréation has become the world leader in monumental wall design in 40 years. Today, this cooperative company with 20 employees, 10 of whom are employees, has more than 750 heritage projects worldwide. In public or private spaces, CitéCréation meets the needs of local authorities, developers, promoters, social landlords and companies. As part of its development, CitéCréation has just raised funds and welcomes the Caisse des Dépôts / Banque des Territoires group as its reference shareholder.

“For more than 40 years, CitéCréation has successfully worked in the territories to improve living together through monumental wall design. As part of our development, we sought to partner with an investor who is not just a financier, but who fully shares our values. The Banque des Territoires seemed to us to be the best partner for this by seeking to reconcile economic efficiency and social performance as closely as possible to local actors. “concludes Lionel Toutain Rosec.

Exhibition of mayors of France and local authorities 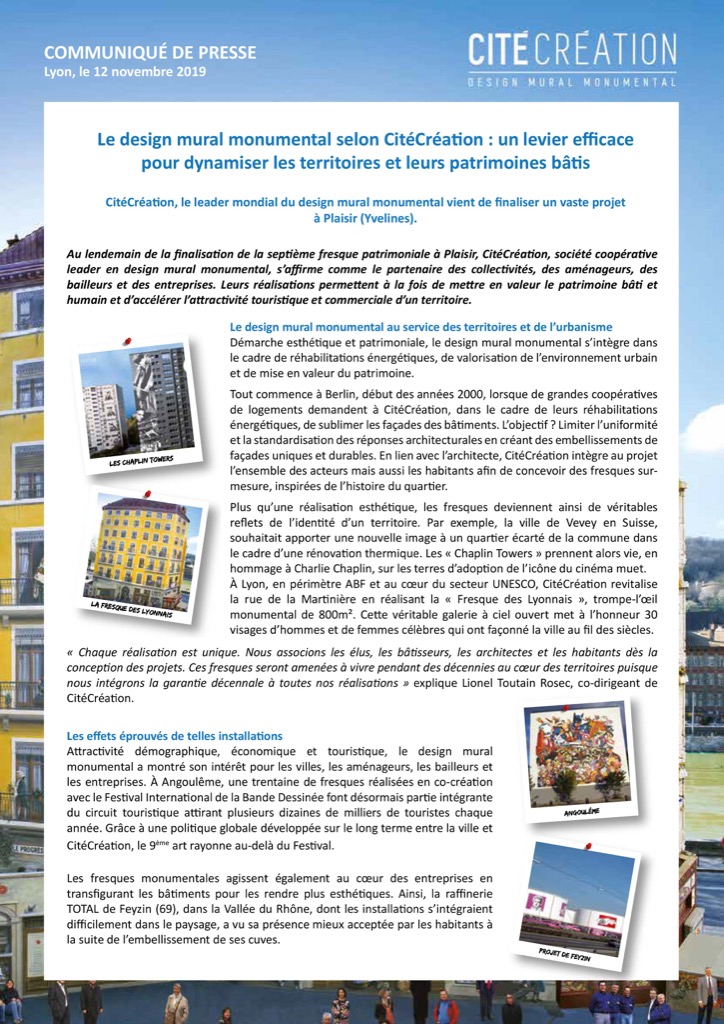 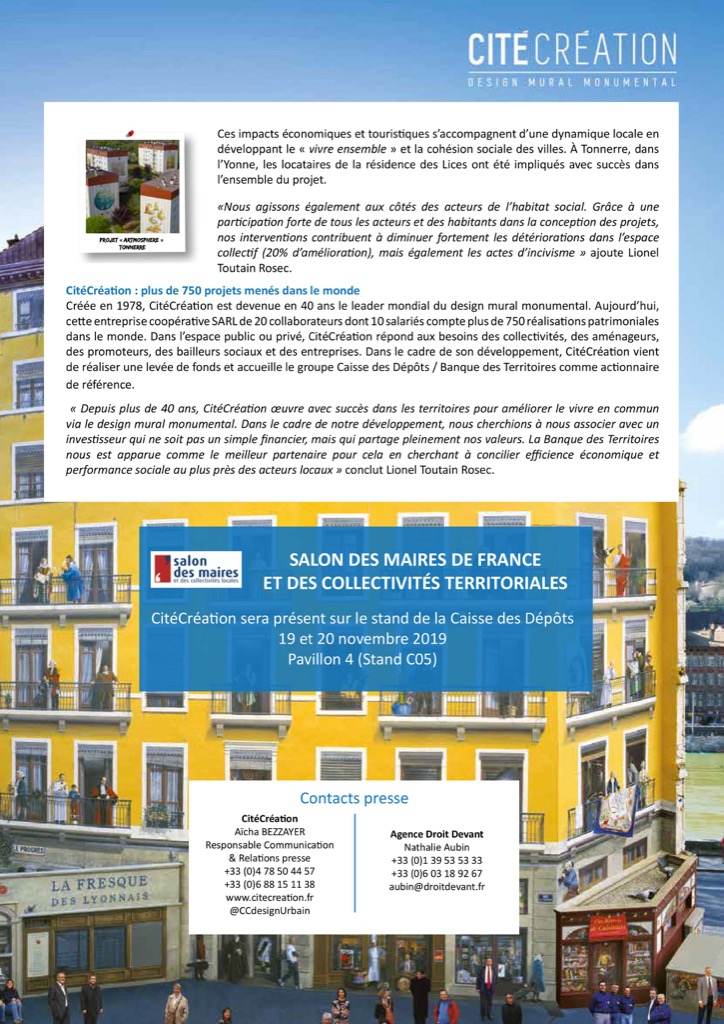 Press release: Monumental wall design according to CitéCréation: an effective lever to revitalize territories and their built heritag