Following on from the Beaureg’art event held in 2018 with Forez Colors and the actions carried out with the Théâtre des Pénitents, Loire Habitat is providing CitéCréation with two gables on its housing group for the creation of two large frescos. The “construction site” starts this Monday.

Two sections of the wall, on buildings already rehabilitated, will be decorated by various artists. Laurent Gagnaire, Director of Loire Habitat, gives some indications: “This is part of the project to restructure the heritage of Loire Habitat. »

Two murals around books on youth

With this urban setting, the neighbourhood’s increasingly lively living environment, which was once a victim of a bad reputation, will find a new youth, in line with what was achieved on the Beauregard tower in 2018 by the graffiti artists of Forez Colors.

“Creative meetings and workshops were held to refine the final decor of the two frescoes. We had to revise some schemes thanks to the intervention of the inhabitants,” smiles Halim Bensaïd, project manager at CitéCréation. “We were asked for color. And then, patatras! Montbrison has become the most beautiful market in France! We had to integrate this element, alongside the city’s dynamic businesses. “CitéCréation has proposed two frescos representing the city of Montbrison, its heritage, its culture, its inhabitants, with two very specific themes: rue Auguste Renoir, it will be “Le quartier de Montbrison”, we will find there the square in front of the shopping centre, a representation of the tower intended for destruction, drawn like an open book, like a page that is turned. You will be able to discover many characters who have made the news of the district, etc..

Everything should be finished before Christmas.

Next to the Spar store, under the “Cœur de Ville” identity, the decor elements will be composed of the music school, the medieval heritage, the fourme, the market, basketball, GéGé dolls, the Loire River, the Forez mountains… A multitude of elements grouped together in something very graphic but readable by everyone, which should also encourage the people of Montbrison in the city centre to “climb” to Beauregard. The artists will begin their works on Monday and should finish before Christmas. It will take about a month to complete each fresco. The project should therefore be finalised before Christmas, even if working conditions at this time of year are difficult.

– 130 m2: the total surface area of each of the frescoes that will be created on the two gables of the building, rue Auguste-Renoir and rue Jean-Baptiste Corot (next to the Spar store).

– 2 months: the time it will take for the artists to finalize the project. They will paint in front of the residents, since no protective tarpaulin is provided, in order to facilitate their work despite the difficult weather conditions at this time of year.

– 1%: the budget represented by the realization of the two frescoes out of the 5.7 million euros invested by Loire Habitat for its work to rehabilitate the Beauregard district’s real estate stock.

– 10 years: the lifespan of wall frescoes without any particular maintenance, according to CitéCréation. The materials used allow cleaning without degrading the initial paint 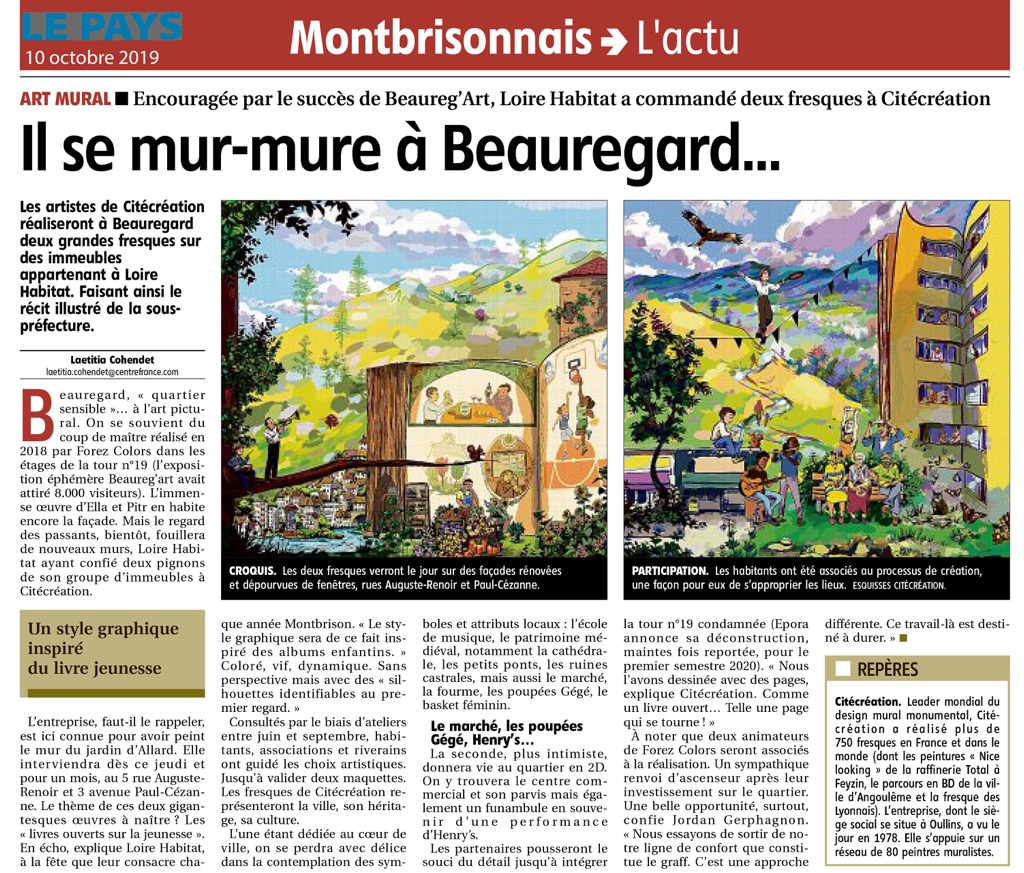