Angoulême (France): After the comic book, Rima sets out to attack the murals

The First Marine Infantry Regiment will soon have a dedicated painted wall on the Boulevard Passage de la République. Quite a symbol

The spirit of comics has stuck to the walls of Angoulême for nearly four decades. A reality that has not escaped the first Marine Infantry Regiment, “proud to be Charente” and anxious to display all the signs of integration with its city of inking.

After a first fictional comic book on the life of porpoises in an armored platoon of the 1st Rima sent on an external operation in Africa, published in 2019, the first Marine Infantry Regiment shifted into high gear on the road to the ninth art.

By mid-October, or even All Saints’ Day, a new wall, in the colors of Rima, will be displayed at 32 Boulevard de la République, in Angoulême. A few steps from the station, after the statue of Lucien, the obelisk Goscinny or the Archivist of François Schuiten (on the facade of the departmental archives). “We are very happy with this location. Symbolically, it is the logical route of the regiment when we arrive from the station,” says Colonel Thibaud Thomas, corps commander, commanding officer of the 1st Rima.

Fawzi in the drawing
It is a first for Rima, and a first for Angoulême, which began the adventure of painted walls in 1982, with frescoes by comic book artists, without suspecting at the time that it would become a tourist circuit with 26 painted walls, projected walls, monuments and places dedicated to comics. “This wall is the result of a political will. This time, it is the comic strip that connects the Rima to the cultural identity of Angoulême, and brings the Angoumoisins closer to the Regiment,” said Xavier Bonnefont, mayor of Angoulême.

The 1st Rima was addressed to Fawzi Baghdadli, cartoonist of the Marquis’ Workshop. “Mercenaries of the drawing”, Fawzi did not hesitate for a second, especially since it was not a question for him “to represent aggressive military acts, but to give back to see an allegory of 400 years of history”. One discovers Richelieu, negotiator of the Treaty of Angoulême, the globe and the flag of Rima, “witnesses to the historical and current commitment of Rima.
Julie Zakary, who lends her wall to the work, was similarly enthusiastic about this drawing. “I find that the gray walls are sad. My only concern was that the drawing was militaristic, which is not the case. It may please the military as much as it may please the passers-by who see the whole world in it,” says the owner of the wall.

On helloeassociation
At the realization, CitéCréation, historical partner of the City of Angoulême, past master in the art of not forgetting the inhabitants in its creations. “A work full of nuance and in dialogue with the public space that in no way diminishes the strength of the image,” says Halim Bensaïd, project manager. The long work of cleaning and preparation of the walls began on Friday, September 18 (expected to last three weeks. It will be followed for five months by the realization with an inauguration scheduled between mid-October and All Saints’ Day.

Cost of the operation for the City of Angoulême: 65,000 euros (repair and creation). To support the project and the City, at least symbolically, the association of Friends of the 1st Marine Infantry Regiment has just opened an online jackpot on helloassociation.com.

A wall dedicated to Goscinny in the process
A scaffolding occupies the corner of 72 rue Goscinny, future wall painted in homage to the late René Goscinny. The illustrator Catel (author of the “Roman des Goscinny”, chosen by Anne Goscinny, René’s daughter) and the muralist Moon are working on it. “The idea is to enter René Goscinny’s studio and find his most emblematic characters there”, explains the muralist. It will be the first painted wall presenting an author.
Objective: to show his prolific creativity. It should be inaugurated in November or January on the occasion of the Book Fair or the Comics Festival.
Cost 95,000 euros, 30% of which is financed by the Department. 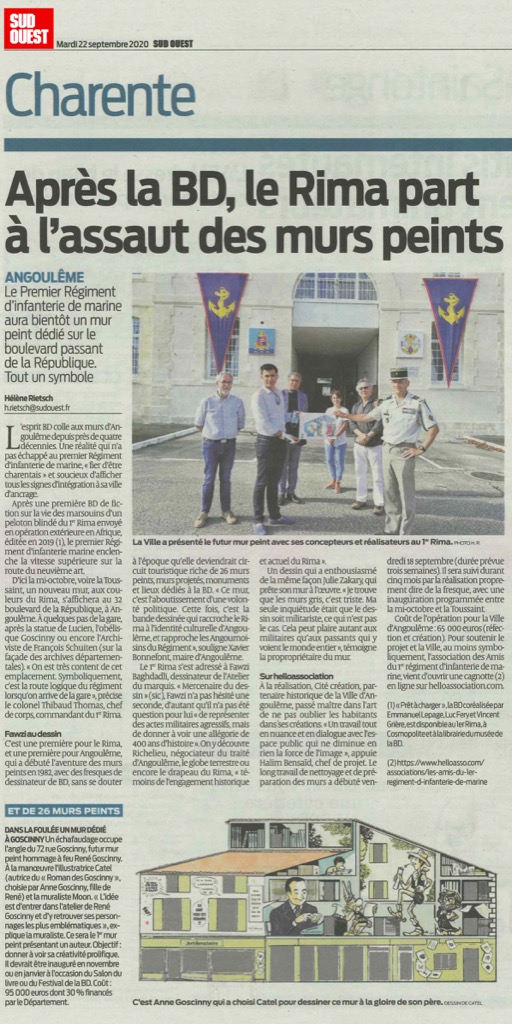 Angoulême (France): After the comic book, Rima sets out to attack the murals