AC – Press: The Tony Garnier Urban Museum must be saved

A true museum in the heart of the city and in the open air, the Tony Garnier urban city of Lyon is known for its 24 artistic frescos created on the facades of residential buildings. After 30 years of exposure, they are now undergoing a vast renovation program.

If there is one architect who has marked Lyon in its urban evolution, it is Tony Garnier. At the dawn of the 20th century, when hygienic thinking guided local decision-makers in their major works, the architect put himself at the service of social progress. On either side of the wide boulevard of the United States, buildings punctuated by projecting windows follow one another in a row. Welcome to Tony Garnier City, in the heart of the United States district, in the VIIIth arrondissement of Lyon. This is the first cheap housing complex in France, built between 1920 and 1934. Before being an open-air museum, this complex of buildings was the project of an “Ideal City” that the architect had named “The Industrial City”. His ideal city, he saw it as very functional with large spaces, sunshine and greenery. But he had to deal with budgetary constraints and add 2 floors to his residential buildings, which he had initially imagined of a more modest height. Construction began in 1920 and the district was inaugurated on June 25, 1934. “Some 70 years later, the inhabitants of the Tony Garnier city mobilized the City of Lyon, Grand Lyon Habitat (formerly Opac du Grand Lyon) and CitéCréation. But also many public and private partners with a view to rehabilitating their neighbourhood. The renovation work will take place between 1985 and 1997,” says Lionel Toutain Rosec, co-director of CitéCréation.

Following this popular initiative to enhance their neighbourhood, 24 blind walls were then painted all the way up. They make up an open-air museum that exalts the work of the architect and urban planner. Since 1988, CitéCréation’s designers have been designing and producing monumental paintings on its walls. It is the birth of the Tony Garnier Urban Museum.
In total, while walking around, you can admire about ten painted walls showing the sketches of the young architect, sketching his vision of the ideal future city. Others represent Lyon’s life. And finally, walls present the ideal city imagined by artists from other countries of the world: Youssouf Bath for Côte d’Ivoire, Abdel Salam Eid for Egypt. As well as Matt Mullican for the United States, The Warlis Tribe for India. And finally, Marisa Lara and Arturo Guerrero for Mexico, and Gregory Chestakov for Russia. In particular, we discover a painted wall on which are shown Tony Garnier’s many achievements in Lyon. We can note the vacherie of the park of the Tête d’Or (1904-1905), intended to provide milk to the babies of Lyon. Les abattoirs de la Mouche et marché aux bratiaux (1908-1928), a revolutionary architecture for the time and now the Halle Tony Garnier, a concert and entertainment hall. The Grange-Blanche Hospital (1911-1933) where he was able to apply many of these hygienic principles. By building many separate pavilions to avoid cross-contamination. Gerland Municipal Stadium (1913-1926), which was to be an Olympic stadium of ancient inspiration.

It must be said that this year in Lyon, we will hear a lot about Tony Garnier, since we are celebrating the 150th anniversary of his birth. A true museum in the heart of the city and in the open air, the Tony Garnier urban city of Lyon is known for its 24 murals created on the facades of residential buildings. After 30 years of exposure, they are now undergoing a vast renovation program.

And it’s a long-term adventure, which unites Zolpan, the painting specialist, and CitéCréation, a cooperative monumental wall design company. Already actors in the first renovation program, they are once again combining their expertise and know-how. About 20 years after the completion of these frescoes, a technical expertise commissioned by Grand Lyon Habitat, owner of the property complex, demonstrates the need to replace the supports for half of the murals. In total, 24 giant building facades made with Zolpan products, a total of 5,500 m2, are to be restored over a period of 8 to 10 years. Of the 24 projects, 8 murals will be reproduced identically, 8 will be improved and 8 others will be completely redone. “5 to 6 coats of paint are applied. So it’s very solid. It takes 4 to 6 people on site for one month. The chromatic analysis of Zolpan is done in situ. In addition, we provide a ten-year warranty,” explains Lionel Voutain Rosec. 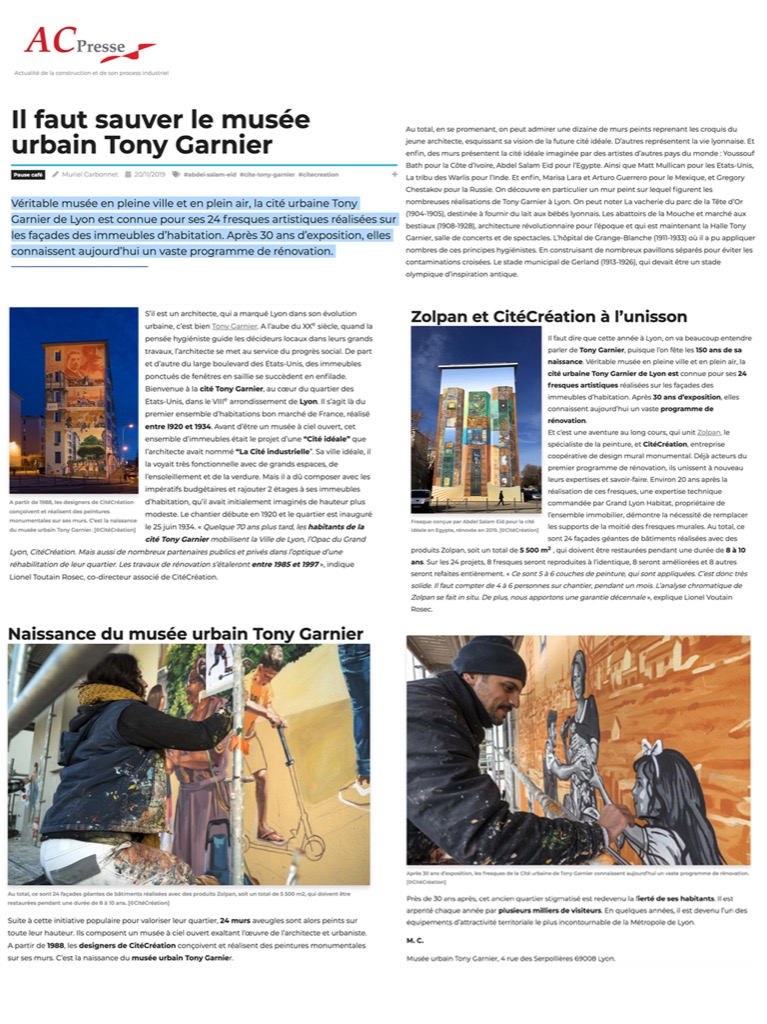